My think tool has now a new functionality when exporting to other note-taking systems: It can preserve hierarchical (tree) structures found in imported note collections (such as Mindmaps, or OPML including Scrivener exports), and it can even derive such a tree structure from my own network maps.

My reason for the improvement was that there are systems which are not limiting their users to narrow-minded “box” thinking, but still use tree structures. One of them is iMappingTool which I have long admired for its aesthetically pleasing visual overview. Using my tool, you can now import your notes there and start imapping.

Another one is a system that has been invented long before software systems, and has always been surrounded by an aura of magic: The Zettelkasten (note box, card index) of the sociologist Niklas Luhmann. In a 1989 video, he shows us (minute 37:25, with English subtitles) how he worked with it, but it is only now that the University of Bielefeld analyzes his legacy and researches its magic.

What I understood is that, besides a dense network of cross references, the distinctive feature is the following: He allowed for arbitrary branching at every point in his hierarchical numbering scheme, in other words, a child note did not have to belong to the same topic category as its original ancestor notes. It was sufficient that its content was somehow connected to its immediate parent.

Why did this have such a powerful effect? Luhmann just recorded “which thoughts come to my mind and in what context”. So, the wider context enabled serendipitous inspirations. But it is very difficult to understand the effects of the small nuances of note-taking techniques if they are only discussed and not practically tried out. This is why my tool offers many import and export options — such that you can play with different systems and understand their differences.

See the blue/ green cluster in the diagram: It turned the red/ yellow tree structure into a structure that was no longer purely hierarchical. 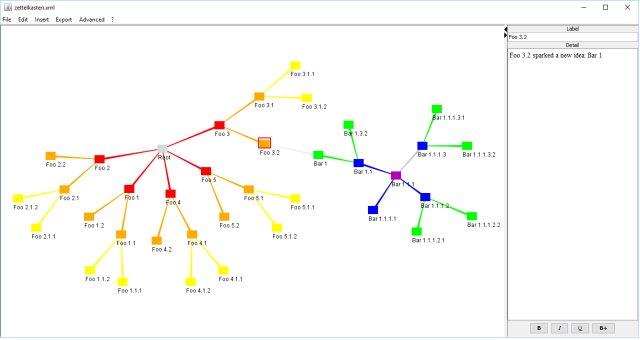 From the orange ‘Foo 3.2’, a new idea “came to mind”: the green ‘Bar 1’, and from there a larger substructure emerged.

This entry was posted in Knowledge management and tagged mytool. Bookmark the permalink.

5 Responses to Magic of Zettelkasten