Thanks to Laura for the proposal which makes the consensus task stretching again, whereas Roland’s good proposal might have been just nodded through.

I think that a shared definition of such a complex term as ‘community’ is unnecessary and therefore impossible to settle on:

In a previous blog post I depicted many possible meanings of the term, see this image 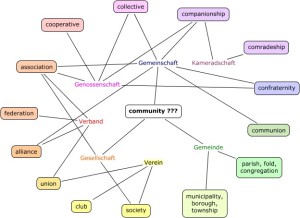 (including some shared German synonyms). Much clearer than ‘community’ — at least in the context of people familiar with Downes’s writings — are the terms ‘group’ and ‘network’, where a group has a shared goal, and a network is not delimited by some borders. ‘Community’, IMHO, is a concept whose scope is rather fuzzily distributed between several such other terms (one might say, its ‘betweenness’ between the neighboring concepts is key, or its meaning is literally in the connections between them).

In particular, like a network, it does not have a predefined, fixed boundary (except in the special word sense of a geographical municipality) but its ‘membership’ is voluntary, as the blonde boy in the middle of Kevin’s bottom cartoon emphasises. And so, unlike the shared goal of a group, a possible shared goal of a community depends on a consensus. That’s why consensus building is a fairly typical task for a community — while of course I agree with Jenny that community can be much more than consensus, let alone consensus about some truth, or even about a technical status.

In an informal community, ‘membership’ may just be defined by each individual themselves, feeling as members or not, or maybe just as participants, for example in a MOOC with variable activity, with dropping in an out and perhaps lurking. If the community is not formally used for anything else, the consensus may even delimit the community: while it is desirable to achieve a broad consensus (of as many participants as possible), it needs to constrain to a minimally necessary level, or a least common denominator, to avoid that some participants may stop to feel, and self-declare, as members. And I was very reluctant to act as a community member, and my tolerance level is rather low.

I think Laura’s task is less ‘minimal’ than Roland’s, if it aims at a definition of a community in general. Maybe this community is easier to define, or the ad-hoc community whose purpose is just to complete the task.

This entry was posted in EL30. Bookmark the permalink.