In a previous post I showed screenshots of processing my own notes and ideas. Here, I want to describe how I use my tool trying to make sense of an existing text by someone else.

This example is the extreme opposite of the former: It was a long text, and because it was a difficult one for me, I used a “close reading” option to split it up into single sentences, and I did not add many thoughts of my own.

What you see below is the raw text pasted onto the canvas, each icon representing one sentence. Most icons’ labels don’t contain words yet. While reading one sentence after another in the detail pane on the right, I add a few important words to the label by selecting them in the right pane and pressing “B+” (Bold special). Similarly, I successively add the connector lines.

Most of the connector lines simply echo the sequence and hierarchy of sections and sentences. If the content of two distanced items is related, I use a different color (often yellow).

Next I recolored the connector lines. 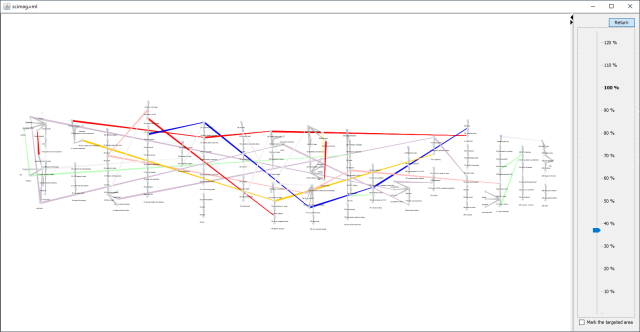 And finally i rearranged the map a bit. (Take a close look on the demo site.)

Of course, the map still looks dauntingly confusing, but I have learned a lot while making it. Note that I don’t normally use such a map to show it off to someone else.

Sometimes, I draw another map with reduced content. Many of my maps contain an entire paragraph per icon. Many contain additional items with my own comments, typically yellow icons simulating sticky post-its.

Sometimes, a paragraph does not contain content that is interesting enough to label it; then I re-color it into “pale”. Sometimes, the train of thought is only loosely connected, then I color the line “pale”. Some items represent headings, which I’ve come to recolor blue (because it is not too obtrusive). However, when I cluster some items around a “tag”, I often use red color for the tag, like it was a town on a geographical map which is surrounded by villages. The direction of the arrow lines does not really mean anything; often I just point them towards a major “town” just to preserve legibility.

Splitting up a text into paragraphs or sentences is not always satisfactory. In the above example, I found image captions or other inserts — but they can quickly be removed. Othertimes an abbreviation period or a running title disrupts a thought into two items — but they can quickly be connected. Conversely, when I think an item should be split, it is easy to copy and paste some part of it as separate item (Rightclick > Advanced > Paste here). I also used “Copy as list” a few times. For lazy labeling, I mostly use the existing words from the detail pane, even if the grammar of the label line then becomes awful. Rarely I type more text other than question marks, ampersands, commas etc.

Finally, I try not to forget to copy and paste the source URL (yielding a pale icon labeled “Source”), because the idea of thought-condensing only works when I can quickly get back to the uncondensed versions.

This entry was posted in 17, Tools and tagged condensr. Bookmark the permalink.