In the last few years I could not recommend all my important tools because the RSS reader was out of service and had big problems. Finally I found a new one, so my list for @C4LPT is now, like 2007 and 2014, complete again:

1. Notepad: for quick notes to self, for drafts of longer emails, and for texts that will become HTML. With its quickness, immediacy, and lightweight, it is closest to paper.

2. QuiteRSS: as RSS reader. Since I think RSS is a great blend between email and web I don’t like it to be too much integrated into either of them, but rather love a specialized, standalone desktop reader.

3. Twitter: as RSS replacement for those who don’t use RSS.

4. Condensr.de (my own tool): for quickly capturing associations and rearranging items to shorten the distance between related ones, such that new connections can more easily be seen.

5. WordPress: both as blog (the public version, I/O), and for notes management (my private local one on the XAMPP stack, LTM).

6. Evernote: for capturing small text notes when I am away from my normal machine (LTM).

7. and 8. gRSShopper and FedWiki: See idiosyncratic tools below.

9. Diigo: as replacement for Delicious for bookmarks that don’t warrant a whole blog post but are too valuable for being flushed down the twitter stream (LTM):

10. Slack: reluctantly when collaborators insist on it (I/O).

Last year I did not spend as much time as before with Cmap and PBworks (previously 7. and 9. — despite I still like them). Rather, I invested more time in exploring and using a special kind of tools.

There are some less popular tools that might be called ‘idiosyncratic’, such as my own tool, or gRSShopper, or FedWiki, or Luhmann’s Zettelkasten.

All of these differ from the mainstream tools in a certain same way: You notice that they were crafted for the developers’ own use, and tailored to their recurring real needs, not as a fixed offering that exploits low-hanging fruit. While the latter often exhibit the ‘sovereign posture’, push themselves in the foreground and are specialized to a narrow context, the idiosyncratic tools resemble the clerk that Doug Engelbart described in his visionary text about the augmented intellect:

Engelbart did not describe such a fixedly defined way of interaction with, and separation from, the clerk as the modern ‘interface’ that we are used to. Rather, the user seemed to continually readjust this division of labor. The user “would find it very natural to develop further techniques on their own“ (see this post for the context and source).

The idiosyncratic tools are often quite simple and universally applicable (more like Notepad or a sheet of paper). Their strength is not the shiny designed features, but more general affordances and opportunities for adaptation. But their benefit may not always be immediately obvious; they may require a short steep learning curve, and as readjusting they may be ‘perpetual beta’. They require (and also offer) some understanding of their simple mechanisms, and thus avoid the notorious patronization by intransparent black boxes. Their developers invite others to try them out, much like cooking recipes are exchanged for mutual appreciation.

Like WordPress, the Federated Wiki (8.) can also be used locally (thanks to @holden’s post), not only on a public server (where this description is useful). After a short learning phase, I started to notice the charm that comes with the short, modular, and hence well connectable, pages.

The gRSShopper (7.) fascinated me so much that I created several posts and some pictures. 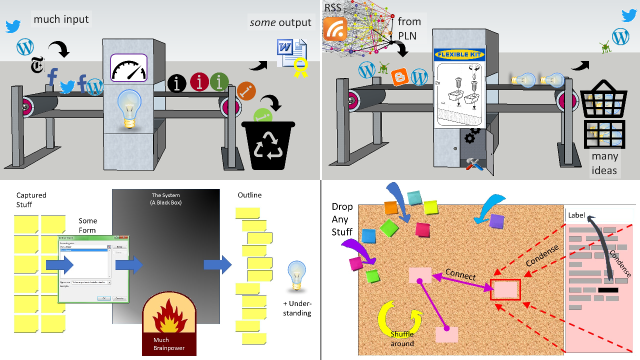 This entry was posted in Personal Productivity. Bookmark the permalink.