In his latest presentation, he speaks of patterns (of recognition) that “layer over each other” (11:20) and of clusters (in competency graphs) where data “overlaps” (53:30). So we can see ever more clearly how this networked explanation differs from constructivist building blocks and from hierarchical organisation, and we can recognize the concept in other accounts.

Myself, I most intensively recognized this idea in McGilchrist’s description of two different ways of “knowing”: one that translates to German “kennen”, French “connaître”, and one that translates to German “wissen”, French “savoir”. McGilchrist employs two metaphors for the two different modes of operation of the brain: the Master vs. the Emissary, or the right and left hemisphere. Whether or not the hemisphere metaphors actually coincide with neuroscientific reality, is irrelevant — although it may have been distracting to many people who hence ignore his descriptions as neurobollocks, so I have to address this reservation first.

I think the role of these metaphors is similar to a “convenient fiction” (as Stephen calls infinity here), or similar to folk psychology terms such as “belief” or “desire” which may some day be reduced to, or eliminated by, neuroscientific explanations, but this has not happened yet. In the meantime, it is useful to replace some folk psychology ideas by “better” ones that are already farther down on the way towards the neuro level. I mean, if we have only a folk psychology idea such as the constructivist idea of “concept” which is just posited like a homunculus, then we might well benefit if we, at least, look a bit closer to how it might actually operate, by using McGilchrist’s metaphors. (Unless, of course, this approximation is mistaken for neuroscientific evidence.) So, how are the Master and his Emissary supposed to operate?

The most plausible description of the Emissary is that it deals with fixed results of experiences:

“[W]e ‘experience’ our experience in a special way: a ‘re-presented’ version of it, containing now static, separable, bounded, but essentially fragmented entities, grouped into classes, on which predictions can be based. This kind of attention isolates, fixes and makes each thing explicit by bringing it under the spotlight of attention. (p. 30)

For me, this brilliantly expresses how knowledge “feels” once it is known.

The other half of the game, i.e. the experience before and up to recognition, is IMHO best illustrated by McGilchrist’s account of an animal’s “need for open attention, as wide as possible, to guard against a possible predator that requires some doing.” (p. 25). 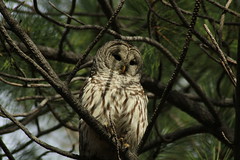 If I imagine the backdrop of dark twigs and branches in the twilight, and our perfected ability to recognize the salient appearance of the predator hidden among the twigs, I am reminded of many characteristics of tacit knowledge (such as the large “backdrop” of experience of the organic chemist whom Stephen mentions), and of wholistic, multipoint vision (such as the binocular sight of an owl who recognizes in the darkness what a single eye would never alone identify).

“[W]e experience — the live, complex, embodied, world of individual, always unique beings, forever in flux, a net of interdependencies, forming and reforming wholes, a world with which we are deeply connected.” (p. 30)

I included another quotation because I hope that these multiple different accounts may add up to a picture of the “Master” hemisphere as rich and live as the one that the quote describes. I can only hope that this succeeds because, after all, this live picture can never really be transmitted by words, rather, it must be recognized by the reader themselves. And if a reader has switched into the other mode, trying to search for something exploitable within the text, they will not benefit from McGilchrist’s text, because this other mode is only for “to focus attention narrowly and with precision, as a bird, for example, needs to focus on a grain of corn that it must eat, in order to pick it from, say, the pieces of grit on which it lies.” (p. 25)

Once this focussing, fixing mode is contrasted with the wholistic “seeing” and recognizing, it is much easier to understand the connectivist idea of knowledge. At least it was for me.

(Thanks to Jenny Mackness for long discussions about the relationships between McGilchrist’s ideas and Connectivism.)

This entry was posted in Knowledge. Bookmark the permalink.