On Tuesday I had the pleasure to participate again in a little symposium called “Denkwerkzeug” (= Think Tool). In a charming location right below Frankenstein castle (lending itself to homunculus associations…), seven very nice people and I met to talk about each other’s problems and progress with their work on their respective think tools. 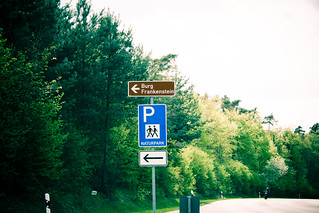 It became very clear that good tools are still missing, in particular those that do not merely support the storing and retrieving of thoughts, but would support the thinking process itself. And no, not artificial monsters who optimize according to impenetrable algorithms to patronize and hook their users, but tools who do the grindwork and let the user stay in control.

While working on them and waiting for them, there is the occasion of listing my own top 10 tools. I have two older lists, one from 2007 which contains tools that I still have not found a replacement for but which have such severe problems that I cannot recommended them for first time users. And another list that I made as a homework assignment in Think Know Tools 2013, where I grouped them into

So I’ll go through my old list and indicate replacements, problems, and the above categories.

1. Notepad for quick notes to self, for drafts of longer emails, and for texts that will become HTML. With its quickness, immediacy, and lightweight, it is closest to paper. It’s still my #1, but I don’t know what to recommend on a Mac. LTM.

2. Powerpoint as mindmap much more often than for presentations…. Has lost its significance and falls down under old #8 (MS Office). Replacement:

3. Outlook Express for email… I still use its successor Windows Live Mail but can’t recommend it because it seems unsupported, and I have often problems with UTF8 and POP. An I/O tool, but too trivial to count.

4. NewzCrawler as RSS reader. Since I think RSS is a great blend between email (push) and web (pull) I don’t like it to be too much integrated into either of them, but rather love my specialized, standalone desktop reader. This is all still true but newzcrawler does not have maintenance any more. I/O.

5. IE7 as browser, for a similar reason as 3. above [Outlook Express because it’s offered out of the box]. Now it’s IE11, and where Google login is occasionally required, Chrome. I/O.

6. SSH filetransfer especially for syncing office and home materials, see previous separate post. Because this great program is no longer available, I use DropBox since SkyDrive annoyed me. But still with the same workflow: two folders “4home” and “4ofc” for moving files, never trying to really “sync” them by copying. LTM.

7. Shortcut to. This may not count as a tool, but it is very important for me to mitigate the hierarchical filesystem by a dense network of cross-references. I described my desktop usage and filing habits earlier. I still need this, as long as the simple graphical link between folders (a connectivist folder window) is not available. LTM.

8. MS Office (Rest). Similarly like with Powerpoint, I use the rest of MS Office often for other purposes than the standard ones. … Still true. Recent repurposing: I use Word for transforming scraped web content into the CSV that I need for my own Tool, for example by replacing all double paragraph breaks (^p^p) by a substitute character such as “§”, then deleting all other ^p and finally replacing the § by ^p. Other times, I open XML files such as RSS feed files with Excel to extract titles and abstracts: Select the 3rd option in the opening dialog, drag the XML elements to row 1, and finally press “Refresh” in group “External table data”). LTM. But no longer among the top 10.

9. WordPress, also for notes management. … Ever more important, both the public version (I/O) and my private local one on the XAMPP stack (LTM).

11. (new 8.) PBworks collaboration wiki, is the most important one among the sharing tools, besides Delicious and Flickr. I/O.

those with restricted recommendation in italics.

This entry was posted in Personal Productivity and tagged mytool. Bookmark the permalink.